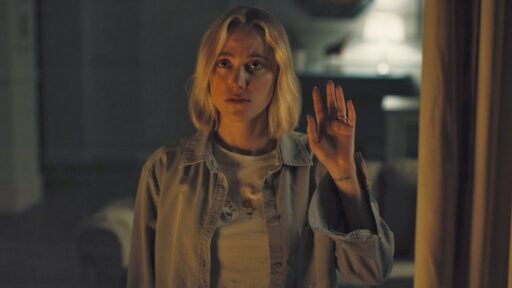 What does “the end” even mean in a situation like the one Nora and Dean Brannock are going through? Initially it was about security, or maybe status; it was the big house in the suburbs, sheltered from the hustle and bustle of the city. It was the end. But really, that was just the beginning.

“The end” became a matter of proving something; find out who was at fault, who was harassing the family outside their home for no apparent reason. At some point, as the costs of investigation and trial increased, “the end” became a financial concept, either freedom or bankruptcy. If the Brannocks couldn’t figure out who the culprit was, they could at least bow out after winning something tangible and lick their wounds somewhere else.

But the Brannocks are gone 657, boul. having proved nothing, and being unable to sell the house. “The end”, then, could be to forget they were there. Nora’s art takes off, so they don’t have to worry about money. But Dean can’t accept that. He can’t accept that they had everything they wanted and ended up where they started, as if they had stepped on the head of the snake that winds its way to the bottom of the board. He’s obsessed with finding the truth or, failing that, avenging what happened to them, which is why he sends letters from “The Watcher” to his former neighbors, to give them a taste of their own medicine.

Dean knows there’s even more to the story. And he’s right.

Theodora is dying. So she calls Dean on his deathbed to tell him one last story. The former owner of 657 Boulevard was her.

What Schuyler had previously mentioned about her husband was true until it wasn’t. She found the woman he was cheating with and tipped her off, and they lived happily ever after. But then they divorced. Because Theodora was the main source of income, she had to pay child support. Then he had a stroke and passed away and she was financially free – well off, even. So she bought the house. And soon after, he was diagnosed with potentially terminal cancer. The only clinic that seemed willing to treat him was in Mexico, but to be saved she had to sell the house. Like Dean, she felt like she had been given a taste of heaven just to have it all ripped off.

It wasn’t until later that she found out her late husband had racked up over $1 million in royalties. She didn’t have to sell the house after all. And now the only way to get it back was to convince Dean and Nora to sell. After receiving a letter from Ode at a house shortly after moving in, and consulting it and seeing the accusation Carol Flanagan made against Roger Kaplan, Theodora devised a plan. She wrote the letters. She invented John Graff and hired the man who was impersonating him. She hired a performance artist to play the role of “Pigtails,” and she snuck her through a window because she didn’t know about tunnels. She planted the idea for the letters with Andrew Pierce, who had never received any, but quickly believed he had.

Why tell Dean? Because she had covered his tracks so well that he would never find out the truth, and he could never live with himself if he didn’t.

With this news, Dean goes to visit Mo to apologize for sending him the letter and offer his condolences for Mitch, who apparently died of an embolism. But when he tells Mo what happened, she has a counterpoint. She knew the old private couple who sold the house to Dean and Nora. She knows all the women of color who are members of the country club and—no one should be proud of that, she says—there aren’t many. She would remember Schuyler, and she doesn’t, which means Schuyler is lying. When Nora and Dean attend his funeral, Schuyler’s daughter explains that she wrote herself into history to give it an ending – to give the Brannocks some peace. But it’s only halfway The Observer episode 7, so there’s more to come.

Read also Cyberpunk: Edgerunners – Everything we know about the Netflix animated series

Meanwhile, the Westfield Preservation Society expanded to include Mo and Roger Kaplan. We can also finally put a name to “John Graff” – William Webster, though Roger recognizes him and rather suspiciously asks how his family is doing. If Theodora’s story was made up, which we now know, then there’s still every chance this guy is John Graff, and the evidence backs it up – he even knows what the kitchen counters in 657 were made of. Boulevard in 1995. Roger is a little puzzled as to how the Preservation Society can determine how people design the interiors of their homes, but as Pearl says, they only make strong suggestions.

Either way, the Brannocks sell the house to Karen. And of course, all sorts of oddities happen when she moves in, including a letter from the Watcher, the tub faucets being left running, her dog being killed, and a strange hooded figure wandering around. Sound familiar?

A new family moves in, and while we don’t see what happens to them, given the number of people – Mo, Jasper and Pearl, John Graff – surveilling the place, we assume it won’t be any good. Dean is there too, although he introduces himself to the new owner as John. Despite his therapy efforts and moving on, Dean can’t leave the house. He lies to Nora on the phone, pretending to be stuck in traffic. And when he finally pulls away, Nora herself stops right outside the house, though it’s hard to tell if she’s following Dean or if she too can’t bring herself to move on.

The Observer Season 1 Episode 7 ends by letting us know that the case was never solved.

Who is the Observer?

Whereas The Observer ends without ever properly explaining who the mysterious letter writer actually is, it is heavily implied to be the so-called Westfield Preservation Society, or at least its original incarnation, which is Pearl, Jasper, and John Graff.

Realistically, at least in terms of the presentation of events throughout the season, these are really the only people who could be responsible. We know they knew about the tunnels. We saw John Graff there. They could have sneaked Pigtails that way, and if “William Webster” was really John Graff, he would have known how to dress him like the girl he killed in the house, as sadistic as that idea is. When Pearl suggested that Jasper may have written the Ode to a Letter from Home on the typewriters in the public library, where “Bill” apparently works, she could have been telling the truth, because that connection is entirely at logical fact.

Pearl, at least, also appears to predate John’s arrival at Westfield in 1995. We know that Mo and Mitch arrived in 1996, the following year, so they weren’t the original watcher who leads John to kill his family in the first place, meaning Andrew’s theories about them being bloodthirsty don’t ring true. However, he was a drug addict and clearly unstable, so receiving the letters alone could have led him to these kinds of wild imaginations. It stands to reason that Pearl was the original Observer, used the letters to drive John insane, then somehow recruited him into the fold to help torment future occupants so that they keep the house intact.

The Watcher post ending explained – who is the Watcher? first appeared on Ready Steady Cut.

Servant season 4 episode 3 recap – why are the nurses doing a seance?