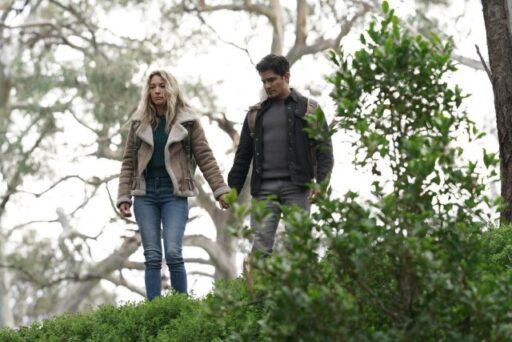 NBC’s mystery box series that’s been compared to all things Lost, Manifest and the oft-maligned Terra Nova returns for Season 2 with even more prehistoric beasts and enigmatic characters. But, sadly, time isn’t linear in the world of La Brea, so the more things change, the more they stay the same, as evidenced by La Brea Season 2 Episode 1, which changed the game by giving us more the same thing.

Last we saw everyone, Riley, Josh, Lilly and Isaiah aka Gavin had gone or been sucked into the portal until 1988. Adult Gavin, Izzy and Ella, the adult version of Lilly, were passed through the portal in Seattle, leading them hopefully to Eve. Unfortunately, they don’t know yet that they won’t find the whole family. It’s a complicated but symmetrical exchange that pulls adult and child versions of the same people from one place to be replaced by their counterparts. Eve is in shock over the loss of her son and the group wants answers from Silas. Meanwhile, Rebecca is still a secret.

Gavin’s trio believe they’ve been through the portal to Seattle in the past and prepare for a long journey. Like the first group we saw ending up in the Ice Age, they quickly encounter massive beasts. Gavin adapts faster than the original group due to the time he spent there with Silas as a child. Luckily, he’s a more than decent hunter and kills a boar for the party to eat. But, unfortunately for Gavin, there are more important hunters among them, and he learns the hard way that there are a lot of things in this timeline that want to kill them. He escapes the woolly rhino, but he knows he’s hunting them now.

The group bonds over shared secrets. Ella tells Gavin about her abduction as a child and her sister Veronica. However, no one has visions anymore, so neither of them can see or sense their loved ones. These three make an interesting group as Gavin and Ella are the spiritual focal point of all the groups. On the other hand, Izzy is struggling with a broken prosthesis, which could become a significant problem. Gavin’s previous experience has prepared him for life here, and he determines that giant animals aren’t a threat if they can fool them with noise. Gavin distracts the hunting rhino with the rhino family, and our trio escape unscathed. La Brea Season 2 Episode 1 ends with them realizing they are in Los Angeles.

This group, along with Rebecca and Scott, has the most potential for future storylines. Their ties to the past and present make them unique and give them skills others don’t have, assuming their visions eventually return. Scott and Rebecca represent science, with Ella and Gavin holding the faith side of the equation.

Rebecca and Scott and the Tower

Rebecca took Scott into the building and, as usual, she was suspicious. She tells him that the people in the building want him dead and anyone with her. Rebecca also says that it will be disastrous for everyone if she doesn’t get inside the building. It’s hard to trust anything she says, so who knows what her endgame is? For now, Scott agrees to help her, and she shows him a hidden staircase leading to an underground tunnel. This tunnel leads to the tower and all the answers he seeks. Whoever is in the building has the ability to bring modern technology to this timeline. If Rebecca is telling the truth, this group can manipulate portals, which is dangerous for everyone.

We know of a new sinkhole that opened in 1988 near the Hollywood sign. Did Riley, Josh, and Lilly cause this when they got sucked into the portal, or did the people in the tower do something to the portals that created the sinkhole and sucked the group in? We should get some answers soon, but with all the great shows like this, the more answers we get, the more questions we think we’ll ask.

Isaiah successfully returned in 1988 as a child and was picked up by the nuns. That circle is complete and Gavin and Eve’s children are intact. We have no idea where Lilly is, though. A clever misdirection led them and us to believe they’d passed the mark and found themselves in the 1950s, but the pair are fine in 1988, with leggings and cassettes. Lucas is excited to vacation with Riley but seems oblivious that they are stuck there unless another sinkhole opens. The next known sinkhole is expected in thirty years, and Riley doesn’t want to wait to see her father again.

I’m not convinced the writers are doing Josh a favor in La Brea Season 2 Episode 1. Jack Martin is likable and extremely relatable with his floppy hair and all-American boy vibe, but this weirdly jaded attitude toward his family is weird. Is he so in love with Riley that he’s ready to cast them aside? Riley can’t wait to get back and doesn’t think sitting around eating junk food and watching ALF is the best thing to do. Josh, on the other hand, seems content to hunker down without any plans. Is it a product of his immaturity or his lazy writing?

What matters is a growing rift between the two and an unexpected chasm that could be the key to getting home. Let’s hope Josh doesn’t become a fan of swimming on Riley and sabotage their ability to find a new path to their Ice Age families.

Everything else, and who are the men in black?

Sam and Levi interrogate Silas because he might know what happened to Josh and Riley. Silas doesn’t cooperate, however. It seems he doesn’t tell them what he knows, not because he doesn’t understand, but because he understands too much. Was Silas once in the tower with Rebecca? It is however the least of their problems, because the group is fractured in many ways.

Sam begins to panic, and without his medication, he collapses. He has no problem with violence, and Ty and Levi fear that he is dangerous. Our group can’t afford Silas’ group to be mad at them. Silas offers to show them how to get to the tower. He tells them that Rebecca knows how to help them. While Ty watches over Sam, who is guarding Silas, Levi and Eve head to the tower. Ty uses his connection with Paara to buy them time and tries to contact Sam about what’s troubling him, but he shut down.

Ty (Chiké Okonkwo) remains my favorite character. There’s such a quality embedded in his amiable demeanor that he’s an asset to every scene, exuding emotion in his interactions. His illness is a serious issue, however, for which we need an answer as soon as possible. The series cannot afford to lose another complex person. We already lost Marybeth at the end of Season 1. She was the only woman in the bunch who wasn’t written as a stereotypical woman. Marybeth was tough, smart, and capable, whereas the majority of other female characters tend to be victims who constantly need rescuing. She is the closest La Brea has to a Brienne of Tarth, and her death leaves a huge void.

Levi and Eve dance around each other. It’s uncomfortable to see them skirting their case. Before things get too complicated, however, several important things happen. They find Lucas, who had to bury his mother alone. We all love a good bad boy, and Josh McKenzie’s Lucas is exactly that. The only thing better than a bad boy is a reformed. After Marybeth finally tells him the truth about her father and is stabbed to death, he’s ready for a major redemptive ark. He’s the same reckless aggressor, though. When they hear Veronica screaming for help when black-clad warriors have taken her, he springs into action.

The group managed to rescue Veronica but ended up losing Eve. This new group has weapons that are unnatural at this time, so they must have come from another chasm. We don’t know who they are and why they want all the women they seem to kidnap. Paara talked about other groups, and some of them are violent. I guess it’s one of those deadly bands. Maybe something left their wives barren, or only the men fell into their particular abyss? Levi promised never to leave Eve again and kept that promise by getting himself captured to be with her. Yet another rescue team will need to be launched, but first they should talk to Silas and Paara. I guess they know who these men in black are.

There are plenty of subplots to follow, and La Brea Season 2 Episode 1 wasted no time in throwing us back into the fire. This soapy addictive series is just getting started. Find all of our La Brea coverage here.

As the editor of Signal Horizon, I love watching and writing about genre entertainment. I grew up with old school slashers, but my real passion is television and all things weird and ambiguous. My work can be found here and Travel Weird, where I am the editor.

The post La Brea Season 2 Episode 1 The Next Day Review And Recap – Season Premier Kicks Off With Some Intriguing Questions appeared first on Signal Horizon.