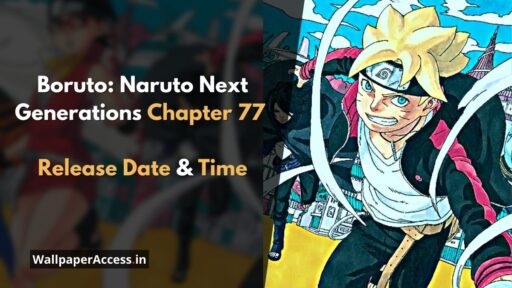 Boruto Chapter 76 foreshadowed a major battle to come in Boruto Chapter 77 and the manga series itself. Fans could witness a showdown between Kawaki and Boruto while Code could launch his attack.

In Chapter 75, the impending catastrophe was first hinted at when Momoshiki revealed that Boruto’s and his own minds invade each other’s consciousness as a side effect due to Otsutsuki using his genetic data to reconstitute his vessel’s body. From the looks of it, things are only going to get worse in Boruto Chapter 77.

Boruto Chapter 76 dropped a lot of hints about the upcoming fight in the next episode. The side effects went beyond the minds of the two being connected, as Boruto briefly manifested Momoshiki’s dojutsu and glimpsed the future.

The vision saw the village of Konoha in chaos while Leaf Shinobi searched for someone who had tried to escape the town. It was left open as to whether it was Momoshiki’s vision or just an observer, but it did show Team 10 approaching someone.

Shikadai used the Shadow Bond jutsu and asked if someone he considered a friend would accept the move. Sarada later called for Mitsuki after finding the fugitive.

Mitsuki activated his Sage Mode while Kawaki was in his Karma form looking down on someone. Boruto recalled the Otsutsuki Prophecy and warned him that his blue eyes would take everything away from him.

But this vision seemed to come true at that moment, because they all looked the same. Will this chaos begin in Boruto Chapter 77?

There are theories that Ada could die in the next chapter after a tweet predicted that whenever the chapter number is repeated a character dies. For starters, AO was killed in chapter 22, Kurama in chapter 55, and Boruto in chapter 66.

This claim is further supported by the violent turn of events in chapters 75 and 76, and to add fuel to the fire, Shikamaru told Sumire and Sarada that the kunoichi could end her life if Ada became her enemy. However, some feel that it is still too early for Ada’s death, and thus believe that either Sasuke, Mitsuki, or Sumire will meet their end.

Meanwhile, Kawaki and Boruto avoided provoking either Daemon or Ada in Boruto Chapter 76 after Deamon showed that he could turn anything they would do back onto them. The two invited Sarada and Sumire over and engaged in an extremely tense conversation with Ada.

Luckily, at this point, they were unfazed by her charm. Chapter 76 ended with Kawaki asking Momoshiki to show himself to Boruto.

Boruto Chapter 77 will be released on Thursday, January 19th.