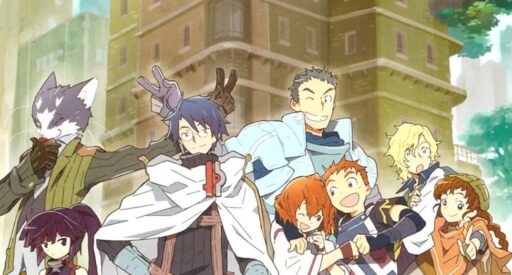 Log Horizon starts out as a very bland version of Sword Art Online, but it soon turns into an anime that’s probably the second best thing to happen to the gaming anime genre. For most similar anime series, a similar structure with game rules makes them even more cliche and repetitive. But Log Horizon uses these rules of the game so cleverly that it actually becomes a very well thought-out and strategically perfectly designed series. Especially for those who are familiar with games like World of Warcraft, Log Horizon has a very special appeal. If, like many other viewers, you were disappointed when Log Horizon came to an end, we have compiled a list of similar anime series for you. You can watch many of these anime like Log Horizon on Hulu, Crunchyroll, and Funimation.

‘Is It Wrong to Try to Pick Up Girls in a Dungeon?’, also known as ‘DanMachi’, is a well-known fantasy comedy that contains elements very similar to those of an RPG. It’s a typical ecchi that, in addition to its excessive fan service, also has an interesting history. The similarity to Log Horizon lies in the obvious use of gameplay cues like gaining experience points, leveling up, and even acquiring magic. Its fresh non-Isekai setup gives it a new appeal compared to all the other similar series out there.

The story is about a little boy named Bell Cranell whose life is saved by a swordswoman. Her name is Ais and she is a quiet young girl who proves to be extremely powerful in battles. In the deep, dark catacombs of the city, Bell embarks on a journey with her, hoping that one day he can be as strong and worthy as Ais.

Hai to Gensou no Grimgar follows a fantasy game concept very similar to that of Log Horizon. In both series, the protagonists are a group of warriors who find themselves in a world where survival is their main motive. But unlike Log Horizon, which focuses more on the political structure of the new world, Hai no Gensou no Grimgar’s plot is fairly simple and revolves around the characters’ day-to-day survival. Another similarity between the two games is that they are quite relatable to anyone who has played an MMORPG before. They contain typical skills and combat strategies that will resonate with all players out there. Another way to look at it is that both series are just alternate extensions of each other, and if you liked Log Horizon then you’re sure to love this series too.

The story of Spice and Wolf is rather romantic and not necessarily limited to the idea of ​​survival. At the beginning, a traveler named Kraft Lawrence is introduced who is looking for a stable source of income. On his way, he meets a beautiful girl who has furry wolf-like ears and a tail. He later learns that she is actually a harvest goddess named Solo and only wants to return to her homeland. What follows is the story of the two characters who embark on a journey through the countryside. This journey takes them on a rollercoaster of emotions, on which they learn a lot about love, but in the end they are both left with heavy hearts and heartaches.

Compared to all the other series on this list, Code Geass has very little in common with Log Horizon. It has a completely different premise and is nowhere near a game anime. But if you are attracted to the main character Akatsuki from Log Horizon, you will absolutely love Lelouch from Code Geass. These two characters are the smartest anime characters of all time and basically strategic geniuses. Apart from that, the two series also share some minor fantasy elements.

The film is set in 2010, Japan has been taken over by the Holy Empire of Britannia, which possesses a secret, impeccable weapon. At this point, Lelouch, an ordinary student from Britannia, finds himself caught in a crossfire between the Japanese rebels and Britannia. Luckily for him, a mysterious girl comes to his aid and offers him the power of kings. So he becomes an all-powerful mastermind who starts his own war against Britannia and wants to restore peace to his country.

‘Maoyuu Maou Yusha’ and ‘Log Horizon’ were created by the same author, Mamare Touno. Both are very similar when it comes to the basic details of their fantasy worlds. Even the characters have some similarities and the overall premise of both is quite intellectual.

Maoyuu is a short 12 episode anime that provides a perfect example of how any historical drama should be. Rather than relying heavily on fanservice or filler, he brings a moderately varied show that has the best narrative and incorporates the perfect mix of historical references and fantasy themes. Some characters’ personalities are just bland, generic stereotypes, but just like Log Horizon, you’re often surprised by the economic and strategic aspects of a battle. Maoyuu is the kind of anime that has many obvious weaknesses, but which it makes up for by creating a very dynamic universe. A perfect anime for those who liked Log Horizon’s conceptual values.

‘No Game No Life’ offers, just like ‘Log Horizon’, diverse characters, huge fantasy worlds, strategic thinking and above all a game environment. It focuses on two main characters, Shiro and Sora, who are both inveterate otakus. They hate the real world and spend most of their time playing video games. They are then magically transported to a game world where the siblings must join forces to save humanity and become the last ray of hope that can save this alternate reality.

Haruyuki, the main protagonist of Accel World, hates being bullied all the time and decides to escape to a virtual world entirely. This happens when Kuroyukihime, who is also a high scorer in the game, notices Haruyuki’s online presence. One day, as the vice president of the student council, she invites him over and asks him if he’d be interested in playing an augmented reality game with a headset called Brain Burst. Although a little hesitant, he agrees when she promises he will never be bullied again. The two join forces and make their way upstairs to unravel the mystery of the game’s creator.

Just like Log Horizon, Accel World presents an entire game world in which the protagonists use common strategies to achieve their goals. But Log Horizon is more of an isekai where the new world is forced upon the characters, whereas in Accel World the characters are free to leave the virtual world whenever they want and have no physical presence there.

Momonga, a middle-aged man, decides to play his favorite MMORPG one last time before it goes offline forever. Disheartened by the fact that none of his guild members have shown up, he makes the most of his limited time. At that moment, the clock strikes the end of the game, but to his surprise, he still seems to be part of the game. He soon finds that all of the game’s NPCs have become sentient and can speak to him of their own free will. In order to get a better grip on his strange situation, he decides to explore the world around him, but will he be able to take control of it?

In both Overlord and Log Horizon, the protagonists are stuck in a game world in which they must learn to adapt and instead of escaping, they must try to improve it. Both anime capture the true essence of real-world gaming by not following in the footsteps of other typical survival anime. The only major difference between the two is that unlike Overlord, Log Horizon’s main protagonist is not superpowered.

A gaming show or Isekai themed anime list would be incomplete without Sword Art Online. It tells the story of a boy named Kirito who gets to experience virtual reality gaming along with a few other lucky gamers. However, after trying out this new technology, he and all other players find that they are not so lucky after all and must now learn to survive in this new virtual world. It’s impossible to log out, and if you die in-game, you’re dead in the real world. Against all odds, Kirito and his friends must find a way to break free.

‘Log Horizon’ and ‘SOA’ have a lot in common. But for some reason ‘SOA’ has reached the peak of popularity while ‘Log Horizon’ is still underrated. So if you had a good time with the lesser-known Log Horizon, you’ll surely love SOA since it was the first anime to popularize the whole video game isekai concept.