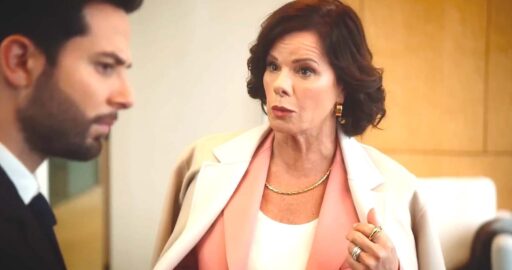 The CBS series So Help Me Todd, produced by Scott Prendergast, follows Todd, a shrewd private investigator with a shattered moral compass, and his mother, Margaret (Marcia Gay Harden), a no-nonsense attorney struggling in the midst of marital troubles. Due to his dislike of the law, he is unemployed and is considered the black sheep of the family. At his mother’s urging, he begins working with her in her law firm.

However, their opposing life principles often lead to a standoff between them. The series is a blend of legal comedy and mother-son drama that is simultaneously captivating and heartwarming, with a generous dose of humor. This is one of the few series that juggles two genres without compromising on the quality of either. The few other series that we think are worth watching are listed below. You can watch most of these series like So Help Me Todd on Netflix, Hulu or Amazon Prime.

In The Recruit, Owen Hendricks (Noah Centineo), a newbie attorney at the CIA, is drawn into the dangerous world of international power politics. He is assigned to a case where a former CIA employee threatens to release highly confidential information if they do not comply with their terms. And these conditions are seldom within the bounds of the law.

Developed by producers Alexi Hawley and Doug Liman, the series is a fast-paced spy story with sardonic twists. It is similar to So Help Me Todd in the way both protagonists stumble and clumsily crawl through the worst of situations, only to get back on their feet just in time for the next one.

Created and written by Aaron Korsh, Suits is a legal drama series that follows the lives of Harvey Spector, a corporate attorney, and his associate Mike Ross, a memory genius and college dropout. He is hired by Spector, even though the latter knows he has no degree. His secret must be kept by the duo while Mike practices like any other licensed attorney.

The series has garnered critical acclaim for its wit, panache, and dramatic storyline. It resembles ‘So Help Me Todd’ in the undeniable genius of the characters as they grapple with legal matters. They also detail the growing camaraderie between the main characters, which is less common with a pair of main characters than the usual couple bubbles.

Created by Josh Berman, Drop Dead Diva is an entertaining legal comedy with a touch of fantasy fiction. After her sudden death, young and shallow model Deborah (Brooke D’Orsay) finds herself in the body of smart, hardworking, and overweight lawyer Jane (Brooke Elliott). Deb has no choice but to continue living as Jane and work as an attorney at her law firm, handling a long line of cases while adjusting to her new life. The film resembles So Help Me Todd in its heartwarming sentimentality while tickling the funny bone and engaging the mind with intriguing cases.

The terrific series ‘Shark’ follows us through the breakneck life of Sebastian Stark (James Woods), a brilliant lawyer who works as a district attorney in Los Angeles. He has a history of successfully defending high-paid criminals and uses his expertise to rescue innocent people with admirable panache. The series also explores his relationship with his daughter Julie, which shows Stark’s soft side. Created by Ian Biederman, the Shark series is similar to So Help Me Todd in terms of the unconventional methods both Stark and Todd use, as long as it’s a win for the right cause.

Winner of 2 Golden Globes and an Emmy Award, Ally McBeal is a hilarious, surreal and dramatic series that observes the lives of the people at Cage & Fish, the law firm where Ally works. She also details the tensions between Ally and her now-married ex-boyfriend, Billy Thomas, who also happens to work at the firm. Series creator David E. Kelley used the legal cases as plot elements to add drama to the characters. Ally McBeal resembles So Help Me Todd in his eccentric and sometimes quirky humor.

A critically acclaimed spin-off of Breaking Bad, Better Call Saul by Vince Gilligan and Peter Gould is one of those intelligently written series that keeps you coming back for the perfect binge. It’s delicious cinematic artwork about criminal defense attorney Saul Goodman (because it’s all good, man!). It shows how he went from being an avid lawyer and con artist to a self-absorbed person with a dark sense of humor. Both So Help Me Todd and Better Call Saul navigate the gray area between good and evil in the legal world, although the latter is perhaps a few shades too dark.

22 Emmy Award-nominated Boston Legal is a popular series centered on the lives of top attorneys at the law firm of Crane, Pool and Schmidt. Principal partners Denny Crane and Shirley Schmidt closely supervise their employees while taking on the most serious and eccentric cases. Alan Shore (James Spader), one of the firm’s top attorneys, is like Todd in So Help Me Todd capable of winning by dishonest means.

Fueled by the power of his keen instincts, high-tech data, and love of psychology, Dr. Bull through all of his cases, taking the jury, judge and witnesses towards his convictions. The penchant for tapping into the human psyche allows the psychologist and process science expert to accurately predict the behavior of those involved in cases and plan his defense accordingly. Todd and Bull are very similar when it comes to their sharp instincts and technical acumen.